We can provide handler/canine teams trained to locate historical human remains, adding another layer of confidence to your archaeology surveys

Our canines are trained to recognize the full spectrum of human decomposition odor; from a few hours ago, or days ago, to a few decades ago, to abandoned pioneer graves in the mid-1800's, to native-American burial mounds which may be hundreds or thousands of years old.

It's not magic - scientific research on the decomposition of the human body points to nearly 500 volitile organic compounds that remain in the soil long after the body has skeletonized (A. Vaas et al 2008, Carabello 2014).

Our detection capabilities take less time than traditional Phase 1 methods and can verify the presence or absence of human remains, adding another layer of confidence to your surveys. Think of it as a pedestrian survey with a hunting dog; a hunting dog that's sniffing for graves that may be right under your feet. Just because you can't see them doesn't mean they aren't there.

Our handler/canine teams are non-invasive and non-destructive. Depending on the weather conditions, the ground cover, and the terrain, we can effectively and efficiently cover a few acres in less than an hour, and considerably more in less than a day.

When the dogs locate the odor of human remains decomposition we can apply our ground penetrating radar unit to scan the sub-surface soil in the area to assess for possible buried remains. This combination of the dog's nose and the radar technology can provide additional evidence/data to your survey. NOTE; It is important to understand that if human remains have been moved from the area the decomposition odor can remain in the soil for decades, centuries, or even much longer. In fact, the molecules that make up those volatile organic compounds can move hundreds of yards in the sub-surface moisture and can be pulled into the root systems of neighboring vegetation.

Contact us to learn more about how we can support your archaeology needs. We can work for you by the day or by project. 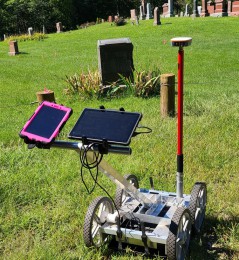 In the image below the canine alerts are superimposed on the gradiometer data. The dogs were looking for casks of moonshine that were buried in the 1930's when in fact they located a native American burial site on the top of the hill. 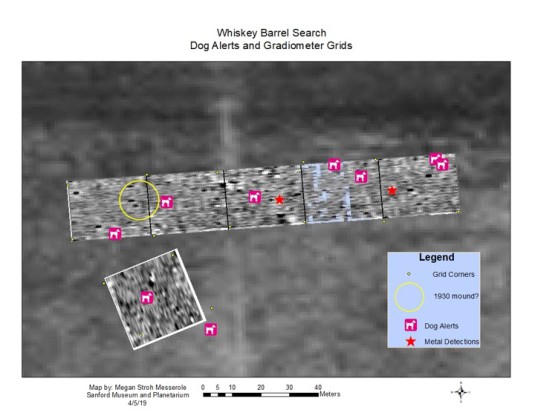 This is data from an archaeology survey of a mound site in the Midwest. It was particularly challenging for the dogs because the prairie grasses were over four feet tall, it was very hot, very humid, and raining off and on. 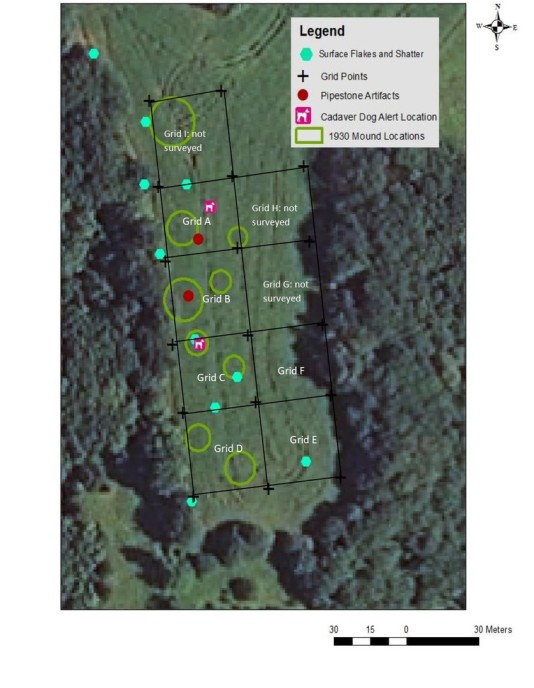 This is Storm early in her training to locate prehistoric native burials. Her behaviors were identical to the behaviors she exhibited on much more recent human decomposition. Storm was recognized by NASAR as the 2009 Search and Rescue dog of the year 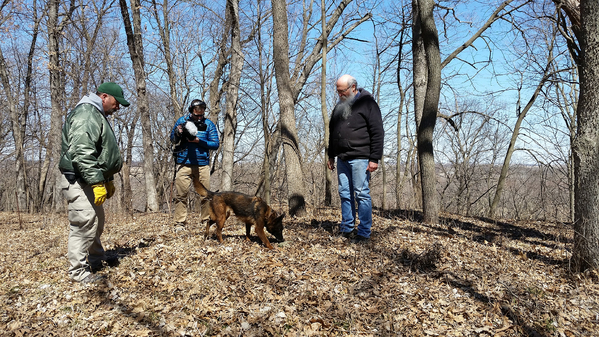